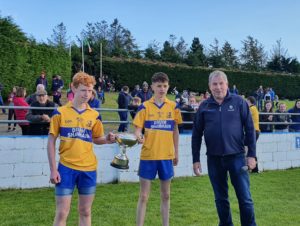 Drumhowan secured  an U15 Division 2 Championship title for the first time in their history when they had a  seven point winning  margin over a gallant Donaghmoyne side  who were only a point behind with five minutes of normal time remaining. The game was played in almost perfect weather conditions at the well appointed Sarsfield Park, Aughnamullen.

Drumhowan got the perfect start when in the first minute Tristan Duffy following a layoff from fellow mid field partner  Conor Curran  ran through the centre to get the first of the eight goals in the game.  In the first quarter of the game Drumhowan were put under severe pressure by the  south Monaghan side. Tom Doherty and Jason Clark scored to leave four in it after ten minutes but Donaghmoyne had the lions share of the possession  but just couldn’t get their noses in first despite scores from Brian Duffy, Paddy Mc Skeane and Danny Lennon. In this period they kicked  a number of wides and  this combined with resolute defending, Drumhowan had a one point advantage when Martin Mc Mahon blew for the first half water break.

Killian Mc Adam put Drumhowan two points ahead after the break  but Donaghmoyne went ahead shortly afterwards  with Brian Duffy  kicking a point and Danny Lennon getting  the Fontenoy’s only goal of the half to  go two ahead. This was short lived as Jason Clark hit a goal and then kicked a point after excellent play from full back Jonathan Lavelle and then the  team finished the half strongly with scores from Tristan Duffy and Martin Quinn.  Goalkeeper David Traynor brought off a good save to leave the score at half time Drumhowan 2 -7 Donaghmoyne 1-6.

Just like the first half the first score of the second was a Drumhowan goal by Killian Mc Adam who rifled it to the net following a quick pass from Eoghan Mc Entee. Things got even better when Tristan Duffy  scored his second goal of the game when his over hit pass managed to deceive  the Donaghmoyne goal keeper Eoghan Cumiskey and Jason Clarke pointed after a Killian Mc Adam 45  to leave 11 points in it after just five minutes of the second half played.  Many thought the game was now over as a contest  but then Donaghmoyne hit a purple patch of their own scoring 2 -3  without reply  2-1 coming from Fiachra O’Roideáin as Drumhowan tried to walk the ball into the goal when perhaps points would have been the easier option. Killian Mc Adam stopped the rot with a point to  leave  just four in it at the second half water break.

The final quarter started slowly  and both defences were getting the upper hand but the game sprang into life  when Donaghmoyne’s Luke Connolly got their fourth goal  to leave only a point in it with six minutes of play left.  Drumhowan’s defence of Éanna Curran, Jonathan Lavelle at full back and the half back line of James Mc Entee, Tiernan Reilly and Tom Doherty  now were in the ascendancy getting out in front of the Donaghmoyne forwards who earlier were proving a handful with Tom getting his second point of the game. In the remaining passage of the game Donaghmoyne failed to score as Drumhowan learnt from their previous mistakes and their forwards kicked points rather than going for goals, these coming from Jason Clarke and Killian Mc Adam who were supported well by Pete Mc Guirk. The final score of the game came with full back Jonathan Lavelle becoming the sixth Drumhowan player on the scoring sheet to leave the full time score Drumhowan 4-15 Donaghmoyne 4-8 . The cup was then presented by Central Council Delegate Padraig Sherry  to joint captains Killian Mc Adam and Conor Curran.